So finally, we are home.

Although I’m sure you have much enjoyed my tales of chickpea based woe, I am very pleased to say that thanks to the land of Guinness and shamrocks, we have been repatriated, despite not actually being Irish ourselves.

I’ll start back at the beginning.

On the 2nd of April, I saw a post on Facebook about the Irish repatriation flights. As we were getting quite desperate to get home, I fired off an email to them (trying my hardest not to include any number of jolly Irish based puns) including my medical history and upcoming medical appointments.

At this stage in the game I was emailing absolutely anyone. Every single embassy, every single insurance, every airline, my MP...

My MP was ESPECIALLY useless, but then again he is a Tory wanker, so I should have known what to expect. When I informed him that the government’s current advice was for us to piggy back on  a plane headed for Italy (aka, the epicentre of corona right now) this was his response. 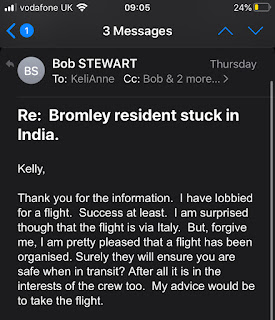 I think you’ll also enjoy my reply. What a twat. I’ve never emailed anyone without putting “Dear....” before their name, but I enjoyed the petty passive aggressiveness that came with just writing his name with no formality. 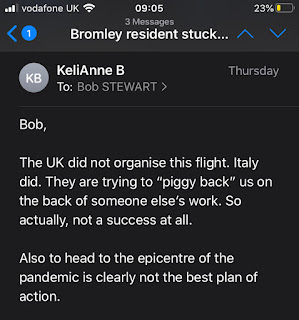 Anyway, later that evening, I received a call from an Indian number, and it was the British high commission in India. They had received my email and needed me to fill in some paperwork. It was a lot of paperwork, mainly consisting of pinky promising to pay back the government for the flight they were arranging.

Which, if I’m honest, was a huge piss take - at £500 a seat, it was double the price, per seat, of what we had originally booked to get home. Where’s the 7.5 million going exactly, hey Boris?

Anyway, we then just had to wait to hear from them. I felt like a teenage girl, waiting on the boy she likes to text her back. I was obsessively refreshing my emails.

Around 10pm, I couldn’t stand it any more and I text the number - thankfully they text back - we were on the flight! 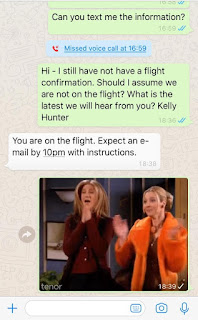 We then had one more day in Agonda to soak up the sun, pack, eat some more chickpeas and green peas (genuinely think I’m traumatised) and then sit and await our collection instructions which “would arrive around 10pm.”

At half eight we received an email confirming we were on the flight. We were then told collection details were on their way. They were not.

We did not receive an email with our collection details until after midnight.

This email said we were being collected at 4am. So you know, really great information timing there.

I grabbed a few hours sleep, and then we dragged our giant suitcases all the way down the village to the collection point. I then received a call from a very nice man called Tom, to confirm I was ready and waiting.

I was so delirious with tiredness and anxiety by this point I think I told him I loved him when I hung up. Oh well. Forever in my heart he’ll be.

The bus then arrived (with aircon, thankfully) and tried to find some seats. The whole thing felt very hostile - we were all glancing at each other with squinty eyes trying to work out if anyone had the ‘rona. There were no seats left together and no one offered to move, so Bertie and I sat apart. There was no mind to social distancing - that coach was full, and I sat next to a man who had a lot of room taken up by his guitar. Why do people do this? The last thing I want on holiday is to find myself on a coach with some wanker who takes every opportunity to pull out his ukulele and sing “wonderwall.”

(As a side note you also find these arseholes at festivals in campsites with his smelly mate doing the ‘drums’ on an upside-down bucket.)

When we got to the airport, it was total chaos - no social distancing and everyone just forming some kind of wiggly queue (very British)  and awaiting instruction. We waited for an hour or so, and then were allowed in, with our temperature being checked before entering.

It looked like a peculiar gun that was held near my head. I don’t really know how they do temperature measurement in India because it’s bloody warm. Bertie had been having kittens the whole way about this, as he’s a sweaty boy, but by all accounts we passed the test and they let us in.

We then were checked in (no business upgrades - how outrageous - don’t they know we have a silver card?!) and then handed the saddest breakfast I’ve ever seen. Obviously I’m allergic to eggs, so I just had the roll, but Bertie had the full force of the palest breakfast known to man. What a hero. 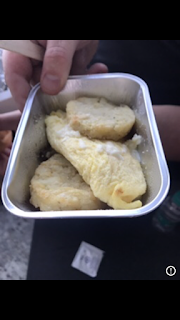 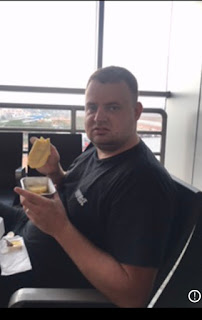 I should mention that you weren’t allowed on the bus, or into the airport, without a mask. Thankfully Manoj had sorted us out masks the day before, and although I was very grateful, I did feel like I was being waterboarded by a sock. It was like a fabric sanitary towel (light flow) with string at each end. We looked ridiculous. But there was no way I was taking it off. Any protection is still protection.

Plus I’d totally colour matched it with my outfit so I wasn’t about to ruin that. 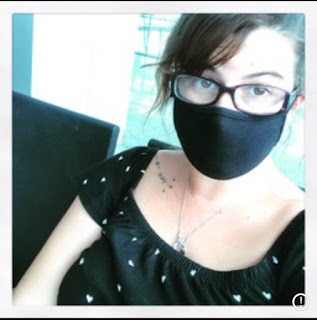 Unfortunately our flight was not direct. We were flying two hours in the wrong direction to Delhi, to pick up some more Irish people, and then back to London. The plane would then continue from there onto Ireland. There was no social distancing on the plane, like I had seen pictures of online (on the Finnish flight they sat everyone with a seat between them - obviously that makes perfect sense but the UK clearly wasn’t concentrating in virus control class that day.)

We were sat next to a lady who boarded with a snotty tissue already clutched in her palm. She had a face mask, but only over her mouth, so her streaming nose could be attended to at all times. I have no idea how she was allowed on the plane, and Bertie shot me a look that basically secured the decision that when we get home, we would not be going straight to Dorset, and we would absolutely be straight into self isolation.

I thought you’d also appreciate how I looked when I decided to take a nap. As most of you will know, I sleep with earplugs and an eyemask. This normally isn’t a massively dramatic thing, but when paired with a face mask, you look like this: 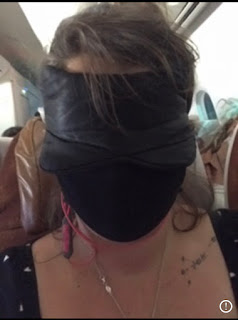 There were two lunch boxes on each chair - the flight was a minimal contact flight - meaning although the airline staff were on board (in full hazmat suits, may I add) there would be absolutely no interaction from them except in an emergency. So basically, we had a 14 hour flight ahead of us and no gin. That really was a disaster. 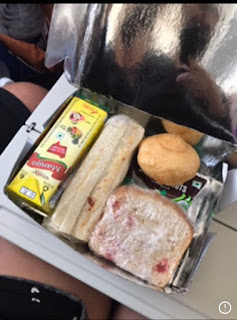 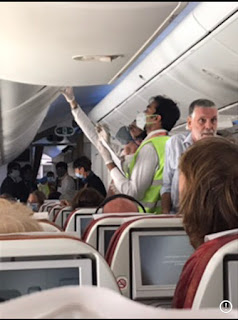 Here is a picture of the lunch they provided. We had two of these, both exactly the same.

Thankfully I had heard there would be very little food provided, so I had asked the restaurant to make us a biryani the night before to take away. I will forever love myself for that forethought, as everything in that lunchbox was vile, and I’ve never been so glad to see a vegetable biryani in my life. 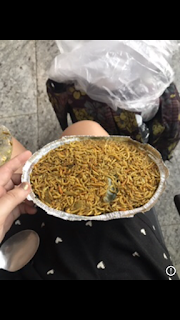 The rest of the flight was uneventful - the sound didn’t work on my in flight telly, but thankfully I had downloaded enough on my phone to watch. We also arrived 40 minutes ahead of schedule due to “no other traffic in the air” - the pilot said this without a trace of humour, but I absolutely cracked up. Of course there’s no other air traffic you eejit - the world is closed!

At 6:20 we touched down in London, and everyone clapped. When I say everyone clapped, I am not including Bertie and I in this, because I hate people who clap when a plane lands. No one claps me when I finish delivering a lesson or when I used to wipe someone’s bum they never gave me a stellar round of applause. I’m sure the pilot appreciated it, but after nearly 20 hours of travelling I just wanted my bed. And a sausage sandwich. 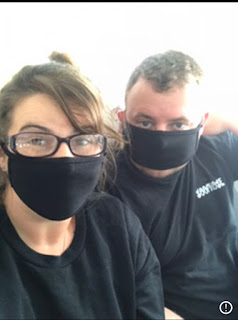 We grabbed a taxi home to limit our exposure, and finally walked through our door at just gone 8pm.

Thank you for all following this journey, and to everyone who signed the petition and did all you could to get us home. I know how lucky we are. There are still thousands of British people stuck in India. They have not been repatriated yet. I cannot believe the ineffectiveness of the government, and the way they totally failed to look after their people.

I’m about to spend the next two weeks eating everything I couldn’t stop fantasising about when I was in India. I spent a solid two days crafting a shopping list to send to my amazing friend Keeley, who was doing us a shop to get back to. I thought you’d appreciate a little snippet of what’s on the list: 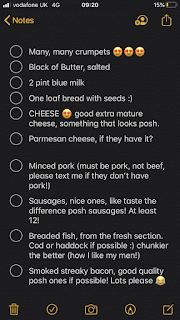 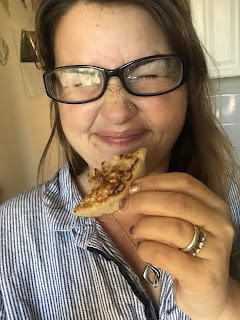 Chickpeas and green peas are not on the menu.

Love you, gorgeous girl. So glad you're home. Thank you for keeping us updated. ❤️❤️

Glad you are back safe.