A little trip into the local village


So as the days merge into one, I think I’ve settled quite nicely into the lockdown life.

I obviously had a bit of a wobble, that was evident in my last blog post. I’m sure this is quite similar to what people have been feeling at home, only less sponsored by a steady diet of chickpeas.

Things seem to have settled down a bit more here - there seems to be a steady stream of vegetables coming through, for which my bowels are hugely thankful, and the staff seem to be a marginally cheerier. It’s incredibly hard - no one can get home - and we aren’t sure if they are still being paid during this time.

I have successfully utilised my free time in the best way. I had quite grand plans of starting an active exercise regime, meditating and reading classic novels, but the reality is that I’ve managed to teach the world’s most stupid dog to do “paw.”

I’ve never been so proud.

We had one day of extreme excitement, when we were told that due to the arrival of tomatoes, we would be having lasagne for dinner. Bertie and I were wide eyed with excitement. LASAGNE. IMAGINE. Obviously it would be vegetarian lasagne but that’s not a problem, it’s still LASAGNE! So we cleared the table all ready to consume something that wasn’t chickpeas and rice, and what arrived was definitely equally the best and worst lasagne I’ve ever had. 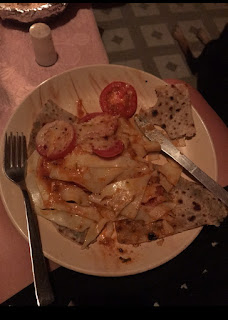 Essentially, it was pasta sheets and squashed tomatoes, with some cheese grated on the top layer. It was both terrible and wonderful. To have something like this after ten solid days of curry was just the morale boost we needed. We ate every single bit, served on top of a roti for an even more confusing twist.

Then today we were surprised by the man who owns our huts, Monaj, offering to take us to his house. This is a huge thing, and we gratefully accepted (after checking there were no police in the vicinity.)

He has been designing and building his house for four years. He estimates that there is another three years to go - it is beautiful, with detailed arches inside and every single factor carefully considered. We were shown around each room - the large reception room to welcome guests, the three bedrooms, the prayer room, and the kitchen. It looked quite small from out the front but proved to be a total tardis. He also has plans to build a second level to rent out to people. 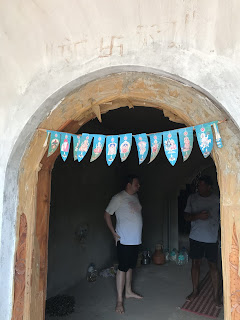 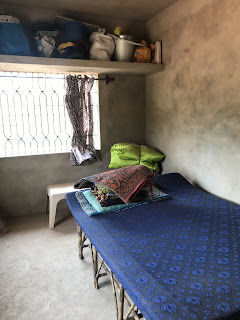 Once we had been given the tour, we were then taken to the side of the house, where Monaj built a fire. Whilst this blazed, he showed us the pineapples and bananas growing in his garden (which settled the argument that Bertie and I had a week before about how pineapples grow - turns out we were both wrong) and also showed us a grass that you can use to make a lemon scented tea. 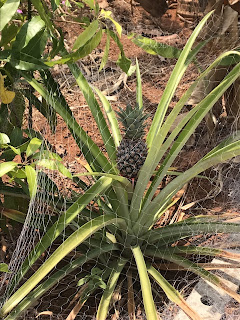 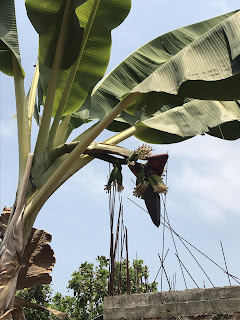 He then threw the cashew nuts (still in their fat green shells) onto the fire, where they sizzled and let out a small burst of flame when the oil leaked out the inside. These are super poisonous, so Manoj coated his hands in coconut oil, before hooking them out of the fire, and cracking the shells with half a coconut. 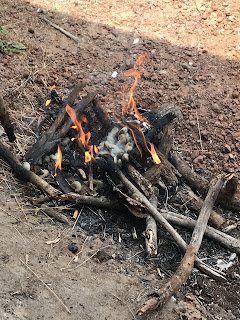 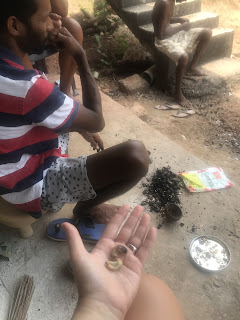 We were then given warm cashews to feast upon. I have never tasted anything like it. So creamy and soft, absolutely divine. It was the most simple snack but the amount of effort that went into it I will never forget. At one point, Manoj’s father came out (we all call him “Daddy”) and he set to the cashews with a hammer. Daddy really likes Joe, because Joe slips him secret cigarettes when Manoj isn’t looking, in some hilarious role reversal.

They then showed us the raw cashews, before the protective layer hardens, and we ate fresh baby cashews that would be used in curry sauces - they are incredibly expensive to buy - 5 rupees each. If you consider how many you would need to make a sauce, you can see why hardly anywhere in Goa offers cashew sauce curry. 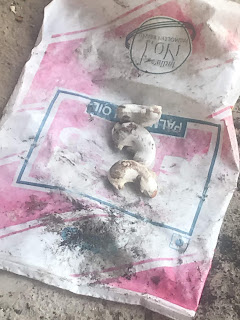 Once he had taken us home, he also gave us each a plate of jackfruit. I haven’t ever eaten jackfruit before, but I know the vegans have been banging on about it for ages. It’s bloody delicious, would definitely recommend, but I’m less sure about having it in a curry. Each to their own. 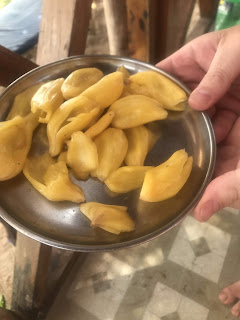 Also, to finish off this blog, I must mention Lucky bringing us a present last night. After a slight tussle as to who was the Alpha, Lucky has finally relinquished his crown to Bertie, after an engaging battle last night.

In seeming deference (or perhaps spite,) Lucky turned up later clutching a whole crab in his mouth. Not only was it a bigger crab than the one Bertie caught, he then proceeded to decimate the entire thing in front of us, with a deafening CRACK as the shell snapped in his jaws and crab brain splattered around our feet. Cheers for that Lucky, you little dickhead. 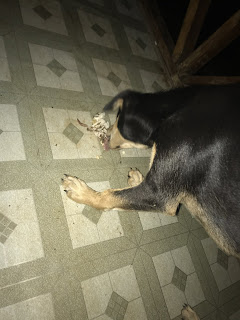 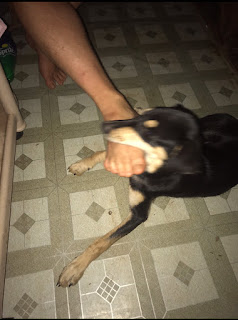 The shops are beginning to open again, and general morale is definitely rising! Although both our flights home have been cancelled, hopefully England will pull their finger out soon. Currently the only advice they’ve given us is to piggy back onto a flight to Rome.

Yup, you read that right.

Thanks for nothing, England! Your best idea genuinely is to fly us to the epicentre of the virus, borrowing seats from another country. They legitimately made a PowerPoint explaining how to book the seats, given that the website was in Italian. I’m not even joking.

So unsurprisingly, we will not be taking that flight.

Look after yourselves! X
Posted by That Wag Life at 05:12

Thanks for the blog.... chin up sweetie xx