Hello again my dear readers! The time has come for me to travel again - somewhere a little different from America: we are off to Goa!

I’ve spent the last week obsessively writing lists and trying to remember everything. I find packing very stressful, and no matter how extensively (and anally) I plan, I still forget something vital. (Casepoint: I forgot Antibacterial gel for Glastonbury, and bite cream for here.)

So we booked a late flight. I’ve never had a late flight before and actually it was lovely. I woke up at a civilised time, not some hideous 4am beginning like most flights I book, and even had time to have my eyelashes done, and have a Byron burger before we had to even think about leaving! Very relaxed, and I would definitely do this again. It’s only really worth it if time is on your side however - if we were only here for two weeks, I’d be seriously pissed that I lost a day!

So once we arrived at Heathrow, we were told we may be eligible for an upgrade due to Berties “gold” tier status. I have no idea what this means, but long story short we were upgraded to business. Long haul business. I was so excited. I tried really hard to play it cool when they told us, but I was there gobbling handfuls of free pretzels so I’m not entirely sure I pulled it off. 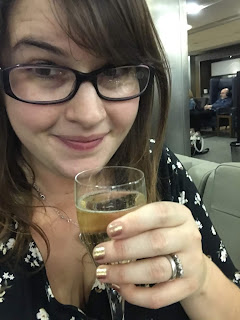 Once we checked in we headed to the lounge. It was wonderful - we had a few glasses of champagne, and I was particularly enamoured with the buffet offering “kaleslaw”, rather than coleslaw. I love a good play on words. Less keen on kale though.

We sailed through boarding and took our seats on the plane. As soon as we arrived we were given the customary champagne and hot towel (again, why?) and I occupied myself with fiddling with all the controls and pouring over the menus!

The flight went super smoothly and I slept for 4 and a half hours - the bed was completely flat which was just a total treat, and I even got a white company travel kit which I was VERY EXCITED about because I love the white company and it makes me feel fancy. I also took a tip from my former BA babe bestie, and asked super nicely for some pyjamas (usually only a first class thing) and the nice lady obliged and gave me some! So within the first ten minutes my bra was off and I had my Jimjams on. Wonderful.

I opted for the chicken terrine to start, and the slow roasted lamb for main. It was divine. I opted out of pudding (even though they had sticky toffee pudding!) because it didn’t seem like a brilliant idea to consume a load of sugar before trying to sleep. 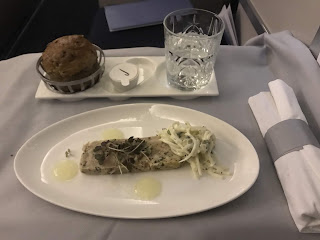 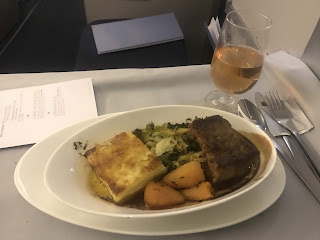 I also had a few glasses of pink champagne which went down very well thankyouverymuch.

I woke up with a raging hangover. I won’t lie. I usually make it a rule not to drink at altitude, but it was a special occasion and they were serving the drinks IN GLASS. GLASS. ON A PLANE. I was over excited. 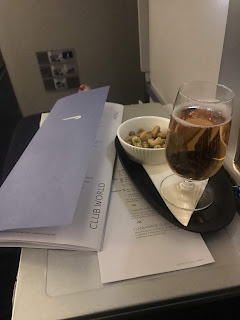 Two paracetamols later I was right as rain and enjoyed the rest of my journey. Unfortunately, as we were obviously flying to India, breakfast was a lamb wrap. I was not behind this, for obvious reasons - (if you don’t know about my list of approved breakfast items, feel free to ask any time!) - so I asked very politely if they had anything a little less exciting, and I was granted a croissant and jam. Much better! 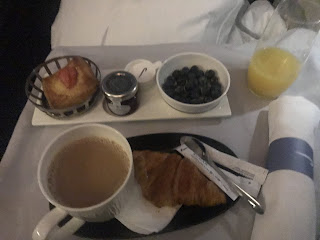 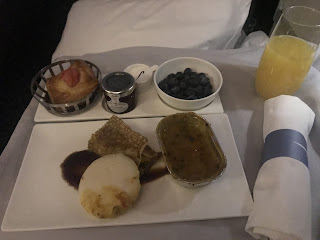 We arrived in New Delhi to horrendous fog. It was the worth fog I’ve ever seen! It was so bad we had to sit for an hour and a half until we could be guided into a parking space (I went back to sleep, so no drama), and then our flight out was also delayed two hours. But, we eventually got there, popped our seatbelts on, and settled in for the next hop. We were in economy for this next bit, and if I’m perfectly honest, the worst part was the fact they played Cliff Richard’s “mistletoe and wine” on repeat whilst everyone was finding their seats. I have no idea why they did that. It’s not even Christmas.

We finally landed in Goa airport and managed to find my suitcase - I have been stressing a fair bit as I believed I’d lose my suitcase this trip. I have no idea why. I shared this worry with Bertie on the way, who out of nowhere produced a sharpie and told me to write my contact details on the case. I have no shame in telling you, dear reader, in that moment I knew that kind of practicality is exactly why I married him for. Find yourself a man who always has a sharpie. They’re the keepers. 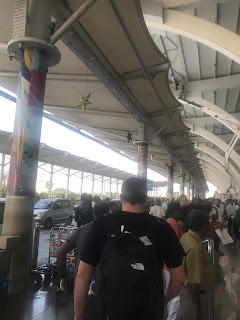 We then embarked on our two hour journey to Agonda. Obviously because this is India we did a little detour to pick our taxi driver’s children up! They were absolutely gorgeous and squished themselves on the front seat, chattering away excitedly. They were gorgeous. It was 2000 rupees to get to Agonda Beach. £100 is 9000 rupees. So a 2 hour taxi drive basically cost £27. India is cheap. A bottle of pop is 20 rupees. A beer is 80. Getting here is expensive, but living is cheap. I’m going to eat a lot of naan.

We are staying in a beautiful hut on the seafront. It has hot water which is a total bonus, and even a toilet door. I am absolutely buzzing about the toilet door, after the curtain we were graced with in 2010. There’s nothing that tests a marriage more than a single curtain between you and someone on the loo. Trust me on this.

It’s now 15:30 on our first day in Goa. We had a great night’s sleep, and are just taking some time to settle in. I’ll keep this blog going whilst I’m here to share all the wonderful sights and experiences we’ll have :)