Over the last week we realised we were spending a lot of time at “base camp” - that is to say we realised all our immediate needs were met by the place we are staying. We have a hut literally on the beach, with two sun beds in front (one in the sun for me, one under a canopy for Bertie) and the restaurant here does the most incredible food. It’s like paradise, only one where you slowly get fatter and fatter because you’re just waddling between the sea, the sunbed and the samosa you just ordered.

So after four days of this, I insisted on Going Out (capitalised to make it official,) and we headed on out to the Netravali Waterfall. It’s about an hour and a half from Agonda, and requires a drive through the most amazing wildlife park, as well as a good chance to see all the local towns.

Whilst driving through the wildlife park we saw loads of monkeys! I am a bit scared of monkeys, I won’t lie, but they were so cute and sat watching us with their funny tilted heads. I have an unacceptable number of money pictures in my camera roll, all increasing in blurriness as the bike speeds up. 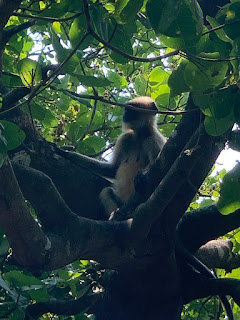 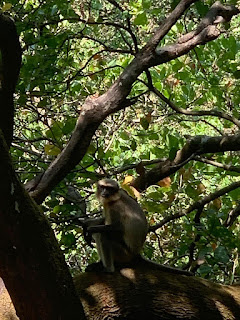 The waterfall itself sounds like a dream - it’s a totally secluded small waterfall with a “pool” at the bottom to swim in. There’s some gorgeous rock pools and they even have those fish in the bottom that eat your toes - less piranha, more foot spa like in Boscombe arcade - so you can cool down and remove dead skin at the same time, if you’re that way inclined. (I am not.)

However; the catch with this waterfall is that it is down 270 steps. 270. In 36 degree heat. With my lack of balance and my lack of love for physical exercise. But we still did it - and as any wise adventurer will know, it’s not actually getting somewhere that’s the hard bit - it’s the getting back up.

270 steps up in that heat nearly killed me. But I did it. I looked awful at the end, but Bertie’s locked in for better or worse, so I didn’t care. 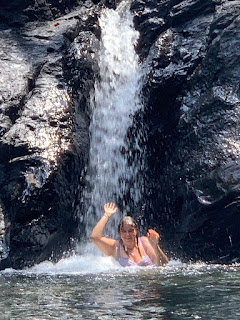 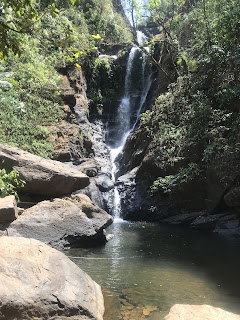 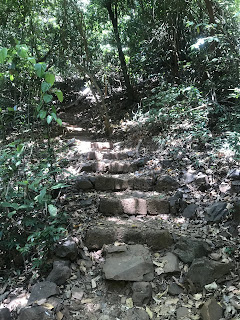 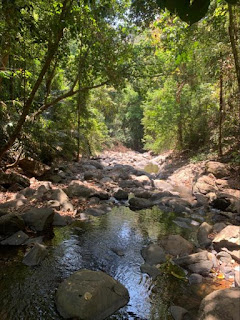 We then took a day to recover (read: lie very still, drink mango martinis and eat a ton of paneer) and then joined our friends Paul and Tracey on an adventure to find “some ancient stone carvings and a sweet salt lake for swimming in, made in a quarry.”

We set off at 9:30, armed with a bunch of bananas and 8 samosas. The journey was roughly an hour, and we’d been given the rough instructions: “where you normally turn left, take a right, and keep going.” ......well, okay, I’ve got google maps, my bumbag, and I’m an independent woman, let’s do this. 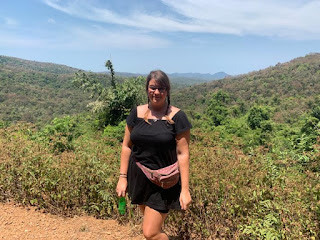 My lovely readers we travelled for fucking ages looking for this mystical lake. It wasn’t until three hours into the trip I thought I ask Paul of the validity of the person who gave directions and told us of this place to which he casually said:

“Oh yeah, she’s totally mad. A proper drug smoking hippie. But she was really certain about this.”

We didn’t find it.

We did accidentally find an ancient rock with a symbol for a vulva on it. I’ll include a picture of me looking suitably disappointed with the vulvarock. 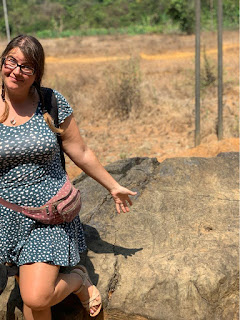 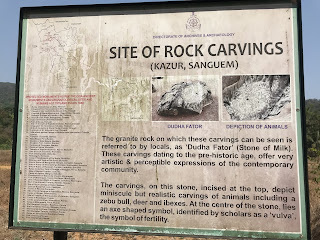 We then kept our faith high, and thankfully accidentally stumbled upon “Green Island” - this huge expense of the most wonderful lush green land, with the most picturesque lake you’ve ever seen. It was so inviting after three hours on the bike that we immediately changed into our swimming stuff and headed to the edge. 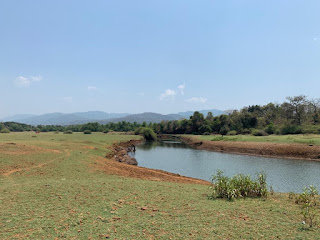 The boys were taking a while trying to find the best rock to jump from, so I took myself off to a lower edge to just step into the cool water. Well, readers, with one step I was completely absorbed by an undercurrent of mud that was so thick and consuming I literally couldn’t move. With every step I was plunging deeper and deeper, and I was already up to my arse in the most horrendous feeling squelchy riverbed I’ve ever known.

I panicked (obviously - I’m great in a crisis) and shouted to everyone to get me. It took both boys two hands each to haul me out, and the mud completely ripped my (very functional, but completely hideous) walking sandals clean off my feet. They were Velcro-ed on around my ankles. The mud did not care.

So I was left covered in mud, with no shoes, and absolutely stinking. We used some of the bottled water to wash my hands, but the rest of my muddy ass had to clamber on the bike and hope the warm wind dried the mud as quickly as possible. 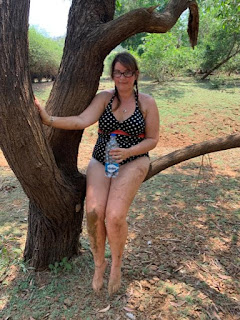 On the whole, the entire event was terribly traumatic, and if you need me in the next couple of days I’ll be lying on a sunbed, eating samosas, and only moving to get into the sea.
Posted by That Wag Life at 23:20

SUPERB. Cheered up my life, beats looking at 4 walls and having to make a decision wether to pop out to buy a daily paper or just not bother. Take care, xx