Here’s the thing about life in goa - the days that are spent doing nothing are the quickest days to pass.

This is Bertie and I’s 5th/6th time in Goa. It is such an amazing place that we keep coming back, and during that time we have travelled and explored a lot of incredible places - Mumbai, Delhi, also basically the whole of Goa and we’ve now reached that stage where we can actually relax, without feeling like we are missing out on anything.

But we haven’t just been sat still - we’ve rented our completely crap scooter, and we’ve been travelling around the south. The scooter itself is a brilliant blue, but with a wingmirror that slowly folds inwards, the faster you go. It’s like it really fancies Bertie and just wants to be close to him. All the time. At top speed. 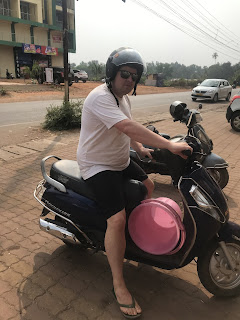 We have also been given some seriously industrial helmets this time around, and there is nothing less pleasant than a full head helmet in the 36 degree sun. Even my nose sweats. I didn’t know noses could sweat.

So all that being said, let me give you a little summary of where we’ve been.

The first beach we headed to was called Cavelossim. According to google it was “the place for water sports and activity” - what it actually turned out to be was a hot spot for travelling Russians who wanted to lie on the beach and click their fingers at the poor Indian waiters. So many engorged red hairy bellies beamed back at me as we entered the strip, combined with the embarrassing signs of places “showing football”, we didn’t even get as far as taking our flip flops off. I turned to Bertie and insisted we left immediately, just on the off chance someone would believe we were like these people just because we were also white. 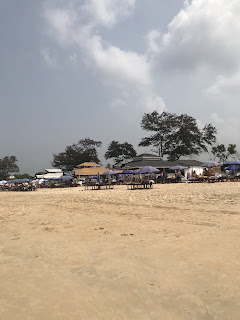 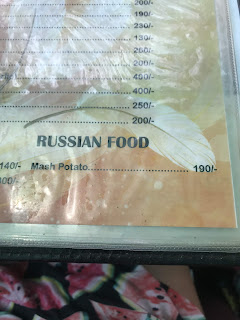 It was like Magaluf, but with older, sweatier, grosser people. If that’s possible. Maybe it’s the same. I don’t know. I never went to Magaluf, but I’ve seen on the telly so I’m fairly confident my assessment is true.

So once we quickly escaped from there (past a picture of the “FAMOUS TOM LEE”, complete in trilby hat who will be coming to “sing the classics” on Friday,) we jumped back on the bike and headed out of there with no destination in mind except “not here”.

We then accidentally found Colva beach.  Now this is a little slice of paradise. The sand is so white, and the water so clear, I was totally in love. There was only 4 beach shacks, all very quiet, and just the most wonderful place to spend the day. The most picturesque beach I think I’ve been to here, and the restaurant “Travellers Inn” did an absolutely banging fried rice and manchurian cauliflower. Highly recommend! 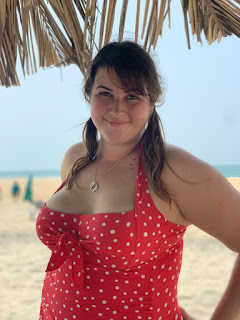 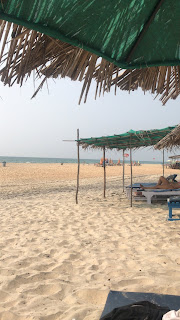 We also stumbled across a cashew tree on the way home. Our taxi driver had mentioned them, and I’ve been looking out for them the whole time - mainly because the end piece where the cashew lives looks like the face of a grumpy old man, and that kind of thing really delights me. 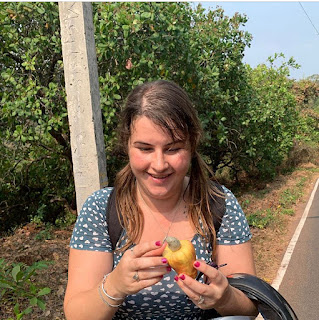 The fruit has the most gorgeous smell - so rich and inviting, a bit like mangos mixed with ripe strawberries. Google says you can eat them, but I’m not taking any risks - we also discovered after picking one that it turns out the bits outside the cashew are super poisonous and will burn your hands if cracked open. Turns out cashew harvesting is a real ballache. So basically we just sniffed the fruit part and marvelled at it for a couple of days. I’m counting it as a holiday experience. 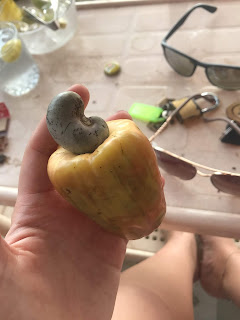 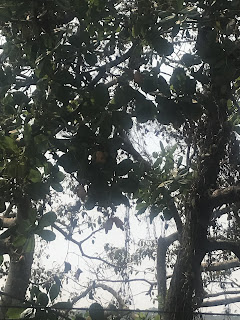 There have also been an increasing number of “luxury huts” appearing in Goa. The closest to us is “Agonda Villas” which have A FULL BATH ON THE VERANDA. I was totally into this as an idea, until I realised it’s too hot here for a bath, and everyone would see me naked as they walked past, because there’s no way I’m having a bath in a bikini.

That being said, there is a sister property called The Cape Goa - we headed there for lunch and not only did the food blow me away, their huts were next level amazing, with the most expensive being £140 a night - this does come with its own jacuzzi and super private huts, each with their own private path to the sea. If I had the money spare I would definitely have stayed there for a treat, but alas, that will be for next time. 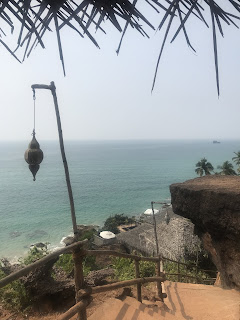 (Also if I’m perfectly honest I went to book a room and they only had single night stays available, and if I’m shelling out that money I want two nights at least so I don’t have to check out by 11am!)

The food there is absolutely incredible, with Bertie saying it was the best tandoori cooked chicken he’s ever had. I don’t eat meat whilst I’m here, but the paneer tandoori was bloody good too. They also have a doorbell, so you ring when you want a waiter and then they appear like magic. It’s like when Aladdin rubs the lamp to see the genie, only this genie comes with poppadoms. 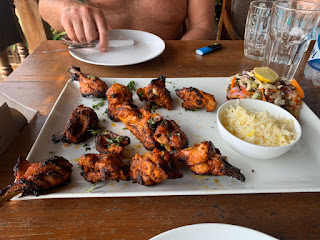 We have also adopted a dog called Lucky. Lucky is the stupidest dog I’ve ever met. He’s lucky (pardon the pun) that he’s so cute because he definitely doesn’t have any brains to get by. The animal sanctuary people came around to try and capture all the dogs to take them to get spayed/neutered, and as they were desperately running around trying to catch them all, Lucky saunters up to them and voluntarily basically walks into the cage. What an absolute eejit. 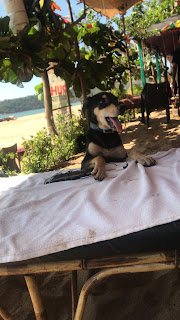 Finally, we visited a place called Galgibag beach. This place has a lagoon and the sea! Double whammy for swimming. The waves were absolutely mental - if you can’t swim, I’m not sure I recommend going here. Bertie and I basically took turns to save the other from drowning. They are completely relentless, but so much fun. Forget whatever experience you’ve ever had in a wave pool, these mofos will send you spinning off your own two feet and whirl you continually underwater until you manage to work out which way is up. There’s also very little shelter here, so if you burn easy, I’d also bear that in mind. The shacks are lovely though, and proudly display “RECOMMENDED BY JAMIE OLIVER” - I’m not sure how legit that statement is. They’ve photoshopped his picture onto their banner. It’s genius. 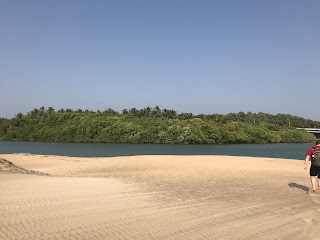 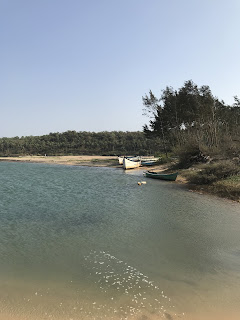 Bertie also slipped in the bathroom and broke a bin. Basically we are slowly keeping the bucket/bin industry alive in goa. He has a bruise in the shape of a crescent moon. It’s majestic.

Holi is starting here in 3 days. I have no idea what’s going to happen, but I can’t wait to tell you all about it! Xx
Posted by That Wag Life at 01:19