So I wasn’t going to do a blog update about Dublin, as I was mainly going for the festive markets, and it turns out Dublin will not buy into any Christmas nonsense until December 1st.

I love Christmas nonsense, and was suitably upset. It was also raining. Rain, and no mulled wine to soften the blow. So I resolved to just spend the weekend sleeping and sulk quietly about my lack of Christmas sausage.

However of course all former plans fell apart, as they are prone to doing when on tour, and I ended up with a hangover, a missed flight, a party in a bar with men wearing leather and a full scale hunt for a postbox.

So, the weekend didn’t quite start as planned, as on Friday I woke up at 6:39. I had my alarm set for 5:30. Just let sink in. I opened my eyes, checked the time and did that proper “movie wake up”, where the main character flies bolt upright, grabs everything and fucking legs it to the airport. Only it wasn’t a film. It was my life. I had no deodorant on, it was pissing with rain, and I was a full hour behind schedule.

You’ll be pleased to know I caught my flight, but the man who was sat next to my unwashed, unbrushed self was far less pleased.

So I arrived in Ireland and it was raining. That’s a fairly current theme here, apparently. It’s also really really grey. For a land sponsored by the colour green, there’s not a lot of it around. I arrived, hid in the cafe around the corner so as to avoid all of Bertie’s workmates (honestly, I looked like a hot mess), managed to grab the key off the lovely tour manager, got to the room and finally washed. It was like being born again. This, by the way, was at 2pm. I just want you to think how many hours I was unfit for public consumption. But consume they did! 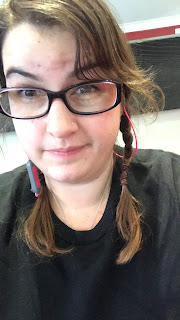 Anyway, Friday was spent napping, bathing and then heading out for some lunch. I had an Irish stew. I didn’t like it. It literally had proper offal it in. I understand meat, I am a meat eater, but I don’t want to see little tubes in my food. I don’t know the sciencey name for what it was, but little hollow tubes sticking out of a piece of very tough meat. I didn’t eat it. Bertie offered to get me a sticky toffee pudding to make up for it, but by that point I was sulking so refused.

(I am aware I was the only person to lose out there, but what can you do? I’d committed to the sulk.)

We also went for a curry in the evening - it was alright, but it was in an area called Temple Bar, which is basically stag and hen do central - there was neon everywhere, and the curry was more about feeding the masses, than proper traditional cooking. I did order a keema naan though and told Bertie the story of how my Italian grandfather told me the meat in it was donkey, and on some level, I still believe it to this day. Donkey is delicious.

Saturday was show day, so when Bertie went to work, I went  to explore the town (and the absent Christmas markets.) The people here just sound so jolly, even if they’re having an argument, their little lilting accents fills me with so much joy I can’t cope. People here also use the phrase “your man”, which I use all the time, so I’m very pleased to find people who use one of my favourite phrases.

(If you are confused, I thought I should add in a little example -
“I went to get a wispa gold from the corner shop, but your man told me they’ve all sold out”) 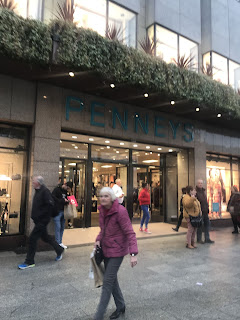 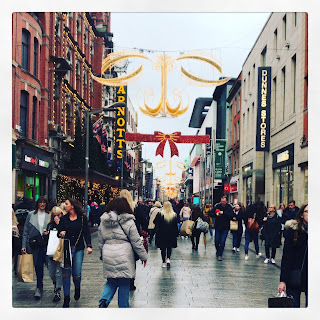 I met Bertie and Sam for some dinner, at a super lovely french restaurant. I had duck liver and foie grass to start. I actually really liked it. Having had foie grass before and really not liking it, I wasn’t sure what I’d make of it. I stand by the fact that I have had the best foie grass in the UK, as I had it at Buckingham Palace when I met the Queen. We’ll save that story for another day, but basically my experience of foie grass has been of a great standard, but regardless I didn’t like the taste. Well done to this restaurant for changing my mind. I’ll be sure to let Ol’ Liz know. 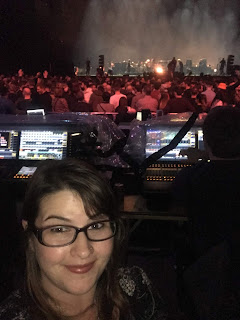 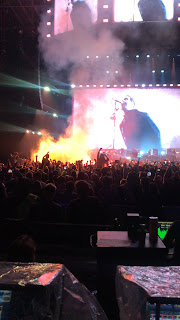 From there, we had a few drinks and moved on to a late night bar. It was a rock bar, and when we walked in there was a MYRIAD of leather. One girl was fully dolled up as a day of the dead woman. There was some kind of terribly loud rock band playing in the background, playing songs with names like “you make me bleed” (I saw the set list) - we managed to escape to outside, and hung out there for a few hours, drinking an increasing amount of vodka lemonades, before stumbling home (via the kebab shop - which put donner meat in my chicken wrap - I was FURIOUS.)

I did however find a green postbox, which I had been searching for since the lovely taxi driver told me about them. I was absolutely thrilled, as you can see by the picture below. 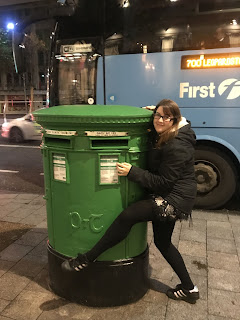 It was around this point (4am) that I realised I was booked on a 10am flight. Using the best drunk logic available, Bertie and I recklessly spent his avios points on a flight for Monday, rather than Sunday, and my little smug ass sat in bed relieved to be flying home with BA as opposed to Aer Lingus.

The practicality came to light the next day when I woke up hungover, absolutely starving and realising I was here for another night. By some miracle I spotted the weetabix I had snaffled from the buffet the night before, and using the milk I had bought at the beginning of the trip (because UHT is never okay, and they never give enough of those piddly little cartons. I need 3 of them alone just to make a single cuppa, leaving Bertie with just one and feeling very sorry for himself), I decanted everything into a mug and sat myself on the cold bathroom floor, munching away until I felt human again. I even added sugar, I’m no savage. Bear Grylls, eat your heart out baby. 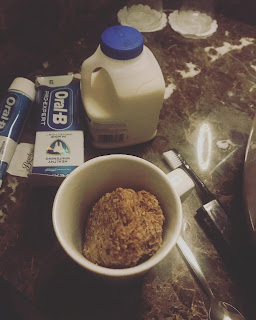 Once fully recovered I got to ride on the tour bus to the venue. I haven’t been inside many tour busses and I still find them super exciting. I went around snapping loads of pictures whilst everyone looked bemused through bleary, hungover eyes. I’ve included them below in case you were curious. I thought the bunks looked tiny, but Bertie is 6 foot and fits, so clearly I would technically be fine if I did ever have to sleep on a bus. (This will never happen. I am too much of a diva.) 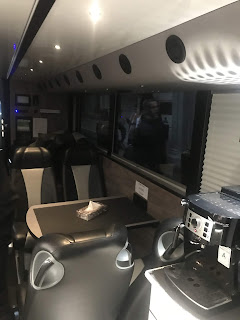 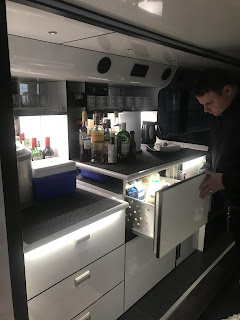 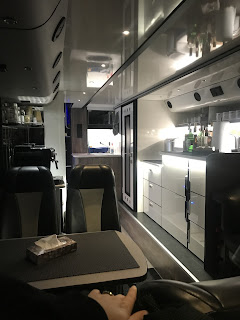 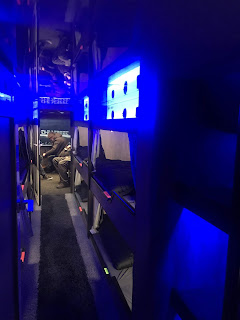 I then realised my tights had a giant hole in. Not a socially acceptable ladder, a giant thigh hole, leading all the way up to  the crotch, leaving one side of my tight completely bare, rubbing against the other chubby half of my leg. Very distressing. But amazingly the nicest runner lent me his travel card and popped me on the tram - it’s called the Luis here - that’s also possibly factually incorrect - it sounds like LUIS, but it’s written in Irish so who knows?  Either way, regardless of what it’s called, it took me to where they keep the tights, and then the very nice man also picked me up. Absolute win. I got back to find Bertie devouring a Burger King and I was so jealous it hurt.

Catering was a full on roast dinner. It was amazing. I also had banoffee pie, because it looked delicious, and I ate so much I felt sick. Shout out to Dags, head of catering, who was lush, and popped my dinner order under “Mrs Bertie.”

The show last night was off the charts. I don’t know why, but the energy was electric. There was pints thrown relentlessly and the crowd moved like the sea - a constant swarm of passion. I also received brilliant advice about working out what liquid has been thrown over the crowd, with the handy guidelines:

“If the liquid is cold, you’re grand. It’s when it’s warm that you need to worry”

I’ll leave that with you as a parting gift, and also this picture of a giant amp rack, that my fat ass thought was a huge backstage fridge. The disappointment was real. 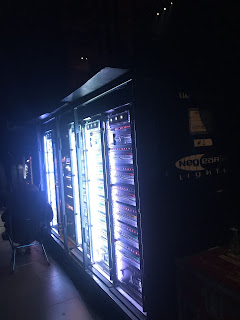 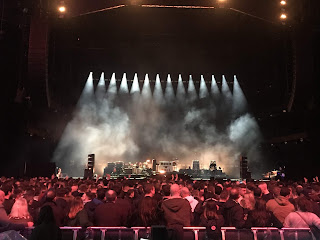