Quite a tricky couple of days at base camp

My apologies for not updating yesterday. It’s been a little hard at base camp recently - food was running quite low, and there’s only so many times you can consume a chickpea curry with any enthusiasm.

The vegetable and food markets have not been operating due to the food trucks being stopped at the borders. It took a few days for them to filter through, but for the first time in about three days we had a curry with some actual vegetables in. I didn’t even complain when I saw the peas floating in my breakfast. I was actually overjoyed at the sight of the little green bastards. There’s a sentence I never thought I’d say.

We were told on Saturday night that we were basically all out of food at basecamp. Bertie and I were not too worried, we have pasta and a couple of jars of pesto stored in our room to fall back on, and to be perfectly honest I was quite prepared to eat dry weetabix minis. But still, the morale was low, and I didn’t really feel like blogging. Chickpea curry twice a day for the last three days will do that to you.

That being said, we have continued to be witness to some wonderful (if a little baffling) local delicacies, including being taught how to eat the cashew fruit I talked about in an earlier blog. 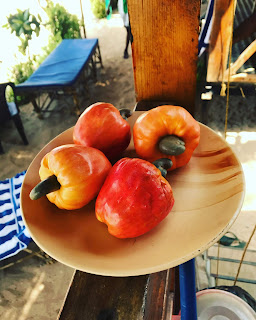 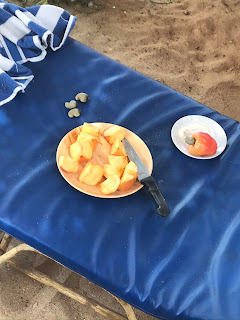 Monaj bought some from his very own garden, sliced away the poisonous bits, and then mixed the flesh with masala powder and salt. You then put the chunk in your mouth whole.

And wait for your entire mouth to violently react.

The first thing I should say is that you aren’t allowed to eat too many cashew fruits. They are so juicy, and the liquid ferments so quickly that if you eat around 4, you are completely shit faced. That being said, I have no idea why on earth you would want to eat four of them, because they tasted a bit like dried apple, mixed with a pillow, doused in neat ethanol and then sprinkled with chilli powder.

I was not a fan. Which was heartbreaking, because I have no idea how something that smells so good can taste so absolutely awful.

Also, if I am entirely honest, I had a bit of a teary day yesterday, where I felt very vulnerable and was struggling to find the humour in this situation. It wasn’t very nice, but in a bizarrely wonderful way, all the men in the camp seemed to remember I was a female, and perhaps a little more sensitive, and throughout the day they all came one by one bearing little gifts.

If I’m perfectly honest the kindness made me even more emotional, that these people with so little are sparing what tiny amount they have to try and cheer me up. It’s honestly both heart breaking and heart warming. I was given little individual single squares of chewing gum, a mini packet of Oreos, and even a small bottle of sprite. Such kindness just completely blew me away. 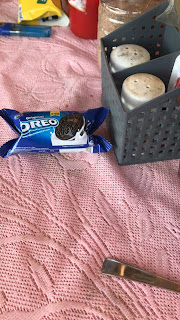 The police were on the beach, so we were unable to go fishing, and the whole restaurant was completely dismantled before they arrived. All tables and chairs were removed, minus the balcony ones, and although we had to share food last night (due to the limited supply) we all had to sit around a sunbed as a makeshift table. 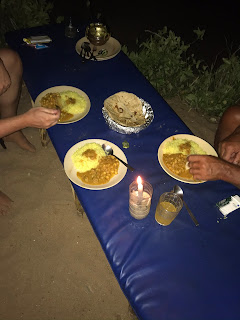 But, the vegetable shop has been allowed to reopen, and there are whispers in the camp of aubergines and even green peppers. I am crossing all my fingers that tonight’s dinner will have some proper vegetables in. My lack of fibre is causing some most distressingly symptoms that I won’t go into, but I’m sure a quick google will give you the down low!

In other news we found out one of the chefs looks a lot like Prince, so that caused a lot of merriment for an hour. I’ll try and grab a sneaky picture for you.

The boys have cast the nets out today, so here’s hoping we can have fish curry for dinner tomorrow :) Also, milk has finally been delivered, so we are able to have coffee again, which is a treat for sure. 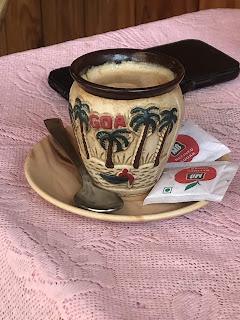 They have also started repatriation flights for many many countries. France, Germany, Sweden, Austria... everyone but the Brits at the moment. But we are keeping positive that soon, hopefully, it will be our turn.

Love and miss you all loads. Ensure there are some crumpets left for me on my return! Xx
Posted by That Wag Life at 05:31