A day of eating, sunshine and often saying I am “never drinking again”

If I start back at the Hollywood Bowl, you’ll be able to see what I did and the poor gin-based choices I made!

So firstly, I didn’t press the button. Bertie helpfully moved me onto a different box, so the glowing light of utter temptation was thankfully/sadly out of my reach. 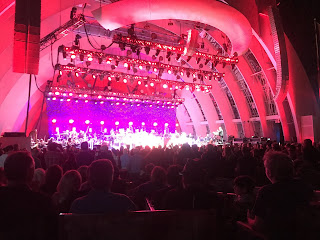 The show was brilliant, followed by picking up our tickets to the “garden seats” in the Bowl, and going to catch a couple of The Who’s songs. The seats were reserved for us by the management, and the view was amazing. I absolutely loved the light show too and  it was so breathtaking to turn around and see people towering above you for miles and miles. I also discovered I quite fancy Roger Daltry a bit, which popped him comfortably next to Jonathon Ross on my “shouldn’t but would” list of older men. (Also featured: Martin Freeman and Martin Kemp)

(As a really quick aside, through Bertie’s jobs I have had both the pleasure, and indeed displeasure of meeting a lot of famous people - some are lovely, a couple were arseholes who really needed telling about themselves. All of this aside, I’ve never really given two hoots about who they were and never really felt particularly excited or star struck. Then this year, when Bertie did the monitors for Spandau Ballet, the chance arrived to meet Martin Kemp. I won’t lie, dear readers, when Bertie popped into the dressing room to check it was okay for me to come in, I panicked like a deer in the headlights and ran. Literally ran. I wasn’t ready to face those dreamy blue eyes and I don’t think I ever will be. I don’t know what’s wrong with me, but love is love, I suppose)

Anyway, The Who were great, and seats were great and then we headed back stage to chill out and have a few drinks. We sat for a while outside in the loading bay, and here is a picture of me looking like the ultimate wag (minus the hair and makeup and false nails/eyelashes/boobs they usually come with) - to be honest it’s just me sitting on a load of flight cases, but if you zoom in well you can see the flight case has Liam’s name on so clearly I’m a legitimate wag. Kinda. 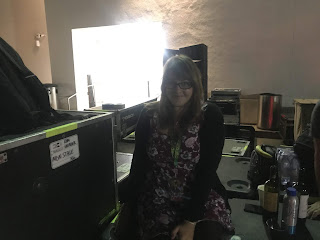 Anyway, this led to us journeying back to the hotel for more cocktails, at which point the vision in my right eye was disappearing and I had to squint at the menu to even make out the words. I actually ended up going to the bar and describing what kind of (off menu) cocktail I wanted, which the Barman kindly made, and then I whipped the 20$ out my bra like some brilliant reveal, paid him, took my drink and tottered off, spilling it everywhere in the process. 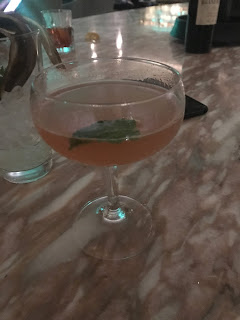 I also followed this ludicrous display with a video message I sent to the group chat. Watching that back the next day made my bum hurt, and I’m so sorry I put all my girls through my slurring. To be fair though, they are all way worse than me and have definitely sent things of the same  over the years so it all evens out in the end.

We then headed to a bar called FROLIC (no actual frolicking occurred) where if I’m honest, I don’t really remember what happened, but I know it ended with a kebab and dragging my sorry drunk arse up the stairs.

You all saw what I looked like the following day.

This was what Bertie had  to put up with a result: 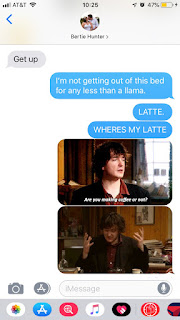 Anyway! One fed and watered and washed and de-shamed, I stumbled out (sunglasses on) to travel to Beverly Boulevard with Bertie who wanted to check out the Stussy shop. There were many designer clothes in this street, and everything looked like that episode of ab fab where she just has hangers dangling from a blank room. Only this was an actual choice, not a brilliant comedy joke. All the clothing lines had “concepts and themes” that I ducked out of hearing and left Bertie talking to many a keen salesperson whilst I placed my head against cool walls and drunk from my Jaden Smith water (because there was no actual convenience stores there and this was the only water available. Fucks sake) 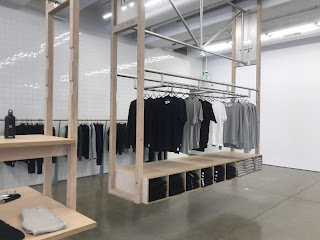 Thankfully, we then discovered a Vietnamese restaurant - after eating nothing but tacos and burgers and chicken for days, it was such a pleasing sight. The food was INCREDIBLE and made me so much happier and human again. Also, why is hoisin so amazing?

Tummies fed, we then met up with a couple of guys from the tour and headed to Santa Monica to see the beach. I was totally excited and even made Bertie bring a rucksack with my swimming costume
and a towel.

Now, I think my reaction to this beach is unfair because I did grow up in Bournemouth. The beach was nice, but the sand wasn’t golden and the water looked quite dirty. The overall image was nice, and they sure know how to make a pier exciting - there was also a lot of food available on sticks - and as tempted as I am by whatever a corn dog is - I’m just not there yet. 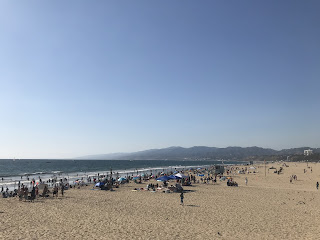 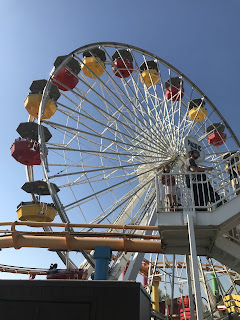 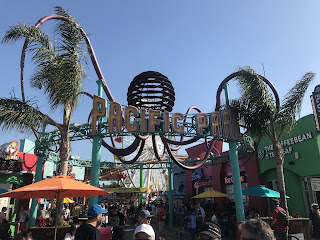 So instead, we rented scooters (which you aren’t allowed to drive on the beach) and headed about 4 miles down the beach to a bar, to settle in and watch the sunset.

(This all sounds so romantic but I’m glossing  over the hour struggle where we couldn’t find the right brand of  scooter that we have the app for, that part where I tried  to rent a motorised Uber pushbike and panicked at the power and weight of it and had to put it back, and at least 2 arguments and 2 broken scooters)

ANYWAY, we got there in the end. The sunset was nice, the nachos were passable and then we all got in a taxi and headed home for burgers. 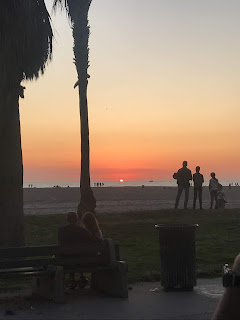 
This is whereby the exciting thing happens. I am unable to digest beef, so usually a trip to a burger place isn’t too great for me, as I have the whole beef struggle, and then the chicken burger batter is usually made with egg. However, recently, these things called Vegan Patties seem to be popping.up. The thing is, prior to these patties I was always left with the option of a bean burger. No one wants a bean burger. They’re usually spiced with cumin or some other spice, which  (albeit delicious on its own) is not a flavour you want in a burger. These patties have been a total game changer for me, and I love them. They also have the bonus of looking like a real burger. Check out this picture. 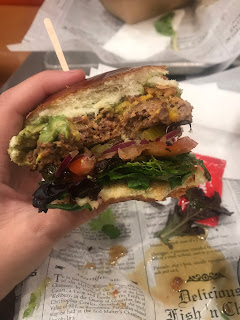 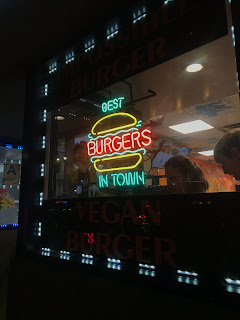 Looks good, right? And yeah, I swapped my fries out for vegetable sticks because I am beginning to feel part whale and my coat is too tight. 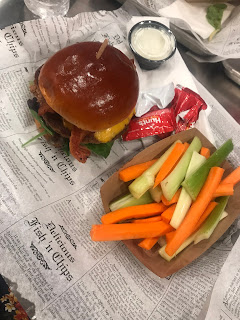 The burger totally did us in, and we headed straight to bed, where thankfully I slept really well, and I am up and ready for today, where I’m definitely going to an ALL AMERICAN FALL FETE where they have animals, a farmers market, and a pie eating contest. I’m absolutely buzzing for it!!

Have a fab day, and by the way LOVED the video of you in the loo!! Xx