The day I met a man called Big Pete.

I would like to start by apologising for yesterday’s update. What a miserable thing to add to your day! But you’ll be pleased to know I have been well fed, rested, and was given half a pint of wine before bed. I’m now in a much better mood!

So, let’s reflect over Seattle. I don’t think the greyness helps. The people were also a little bit peculiar and, in my opinion, went against the super-saccharine personality that most Americans have.

They’re also really weird about asking for ID, and will only accept passports, not driving licenses. That’s a ball ache. I am my mother’s daughter and feel twitchy when my passport is anywhere other than a safe.

But the market is an absolutely incredible place, and chewing gum alley was super cool. I’m a bit upset I didn’t get to leave my own piece, but I was ill prepared and also get the fear every time I chew gum that I’m going to swallow it. I would fully recommend going to spend the day at Pike Place Market, with the added bonus that it’s indoors and therefore less wet than outside.

They’re also super big on seafood here, and you can buy crab and oysters pretty much anywhere. It’s not my thing, but if that’s something you like, then Seattle would be good for you!

But, grumpiness aside, I spent the day yesterday doing the laundry (in case you are interested, it cost considerably more to do laundry here than in LA - I know you’re not interested but this is my blog so shove it up your bum) and then heading to the market to have this delicious naan based treat that I saw the lovely Sam have yesterday. It had red Dahl and masala sauce on top. Very pleasing. 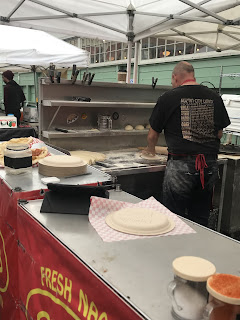 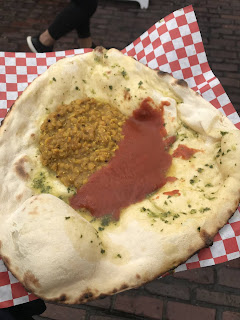 I was then picked up by this awesome driver called Pete. Big Pete. He wasn’t a small man and he was wearing red sweatpant shorts. I loved him. It was just me in this giant minibus thing, so I sat up front and rode with him. He was brilliant and we nearly ran over this complete jobsworth who threatened to call the police because he couldn’t find his registration on the list (spoiler - it was on the list.) 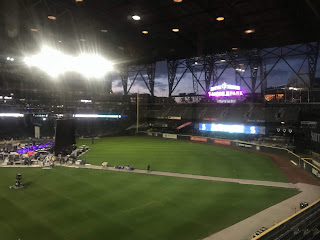 Anyway, we were doing the T Mobile park stadium. It was giant. It was literally a venue used for sporting stuff (Soccer? Baseball? American football? Whichever one it was. Are they not all the same?) - either way, walking out onto the pitch was amazing, and felt totally surreal.
People were sat way up in the Gods and looked like little tiny ants. You can see by my photo here that I’d perked up a bit, and Richie was absolutely thrilled to be in my company. 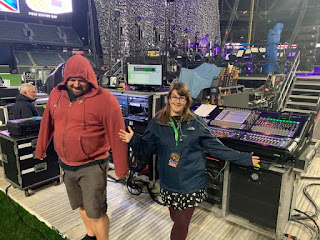 Also massive shoutout to the lady in the crowd dressed as Geri Halliwell.

The gig was great, and to top it all off, there were these crisps, HIPPEAS, in the dressing room. They’re chickpeas, turned into crisps. Who’d have though they could get any better? Falafel, Houmous and now  crisps! What a legendary food.

We left the gig fairly promptly, and headed back to the hotel. Bertie and I took this opportunity to hide in the hotel room, order pizza and watch Netflix.  What a total treat!

We are now on the Alaska plane to Vancouver. Canada has a load of rain, and cold waiting to greet us. I have two warm dresses. I’m thrilled. But on the plus side, I packed woolly tights, so it’s not all bad! There’s a lot of time off headed our way, so hopefully we can explore what Canada has to offer :)

We have Hippeas over here! I see them all the time! So the good news is that when your American adventure ends, the Hippeas shall live on. Yay!