So following on from the shameful bin-throwing up madness of Friday, I am now a fully functioning, non alcohol consuming adult again for the foreseeable future. Until I turn 30 in a couple of weeks, at least.

After a fairly painful flight, where they fed me cheese and crackers because the wrap was beef, we landed in New York around 10pm. The time zones have changed again, and I’m still running on San Francisco time. As a result Bertie and I found our pathetic, hungover selves at a chicken shop having the most incredible (obscene) fried chicken at 11:30 at night. 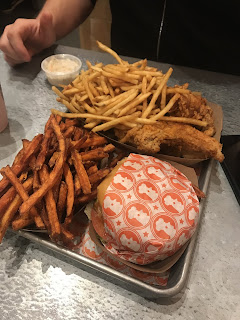 We then slept until midday, eventually surfacing to forage into the nearest place that sold brunch. Once rejuvenated and fed, we decided to walk the hour or so journey into the centre of New York, right into Central Park.

It was a beautiful day, with the sun shining, and we ambled around the park joyfully. Bertie had a hot dog, and then we saw a live roller disco, with the most wonderfully bizarre collection of people taking part. I could have watched them for hours. 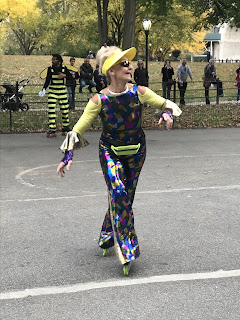 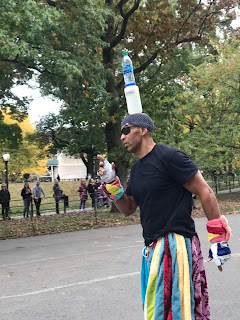 We were then lucky enough to also witness a live proposal! The man had arranged for all his friends and family to stand on the bridge over the lake where you can hire sail boats (my mum and I once hired a boat there and tried to row it, and I was so cack handed I legitimately nearly decapitated a terrapin - there’s a picture of me doing this, but it was back when I was thinner and I don’t need a reminder of the ever constant fattening of my cheeks) and they all stood there with placards and balloons, and waited for him to row past - he got down on one knee in the boat and everything - not an easy feat - and then when he did, they popped the balloons up and all held out the placards. It was so lovely and wholesome, and because we are in America, everyone cheered and clapped and I wholeheartedly joined in.

We also ate a lot of pizza. 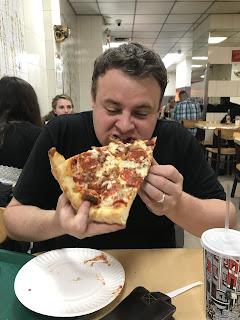 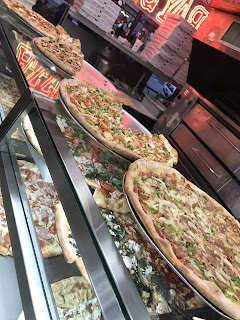 We then left central park and headed to Times Square - it was everything I wanted it to be - full of lights and colour and people dressed up as Minnie Mouse trying to rob you of your money for taking a picture. Two girls were there completely naked with only body paint depicting the America flags over their boobs - but funnily enough no one seemed to mind giving them money for photos. They did have a bumbag, obviously, for keeping the dollars in. They aren’t stupid.

We explored there for a little while, including being offered drugs on the street corner, which was totally exciting and a very authentic experience (I say this - they completely ignored me and just approached Bertie because he obviously looks like a ruffian) and then we decided to go and see a show. I say decided - I dragged Bertie to the TKTS stall to try and find the least offensive show that I could get Bertie to agree to seeing (most likely followed by promises of dinner/head rubs/wine.) 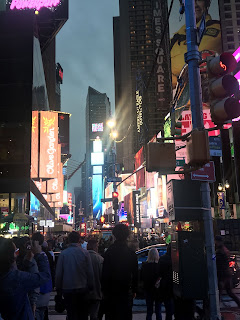 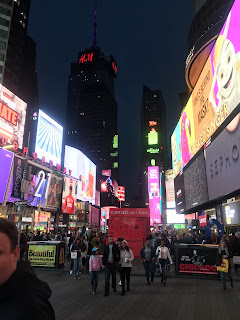 Brilliantly, the show we saw advertised was Derren Brown’s ‘Secret’! I absolutely love Derren Brown, and in Bertie’s words “anything that’s better than a musical is fine” - so we headed there to watch it. 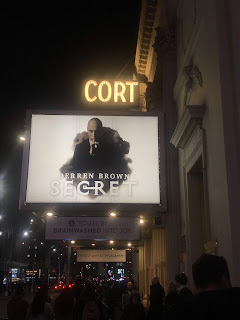 During the show we were asked to write down a personal confession - I shared my much lamented truth that (until 3 years ago) I thought that those large brown huge animals you saw in forests were called “beefs” - I did not know they were called “bulls”. What a total treat this was when he raised it in front of everyone. Cheers Derren. 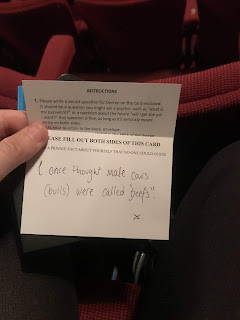 We also ordered a beer and a coke at the bar. One beer, and one coke. It came to $28. I suggest going elsewhere for a drink. Seriously though, $28 is ridiculous. They came in some kind of ludicrous cup too. Apparently you didn’t get any more back if  you return the cup either. Stupid New York.

I remember that poor terrapin :) lots of happy memories xx