Today, the sun did shine! Thank the baby Jesus and all his friends up in the sky for bringing the warmth and rays upon me!

Seriously though, after yesterday’s absolute downpour, having the sun shine was literally transformative.

I’ll start back at the gig, which was absolutely brilliant. Definitely the best crowd so far, including a few super fans who wanted me to take several pieces of merchandise backstage for signatures. Sorry mate, I’m only in this for the free gin, not fetching signatures.

So far, my favourite bit of this tour has been pulling up in the artist van to the stage door to see people anxiously holding CD’s for someone to sign... and then the door opens and it’s just me with a face full of Hershey’s chocolate wearing an oversized waterproof mac and falling off the last step. The disappointment is real.

One guy did take a photo though, so I’m probably famous now.

I also enjoy lying to various members of the public who ask what job I do on the tour. I usually lie and say “social media and logistics” which sounds like a legitimate job, rather than “blogging and washing my husband’s pants.”

Last night I actually also had the exciting job of holding Liam’s waxy in-ear monitors, so you know, I reckon that’s a promotion? I don’t know really. 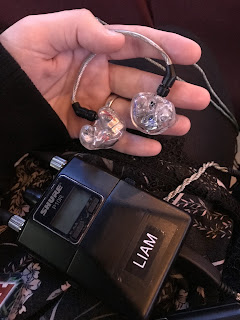 Anyway, today was a day off for Bertie, and he had his eye on heading to this suspension bridge about 25 minutes away. After being told it was 70$ in a cab to get there, we set off towards the tube! It’s a lot like the London tube, only with slightly less body odour hanging in the air. We travelled to The Waterfront and found the free shuttle bus to the bridge. We were like actual tourists, on a coach and everything. Bertie was totally thrilled. 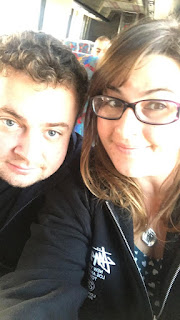 We probably should have researched a little more before heading to this place, as a ticket to the bridge and surrounding walks was 60 dollars each. Or it should have been, but I sent Bertie away and managed to get student tickets for 39 dollars. I have no shame and the face of a nineteen year old. Might as well make it work for me. 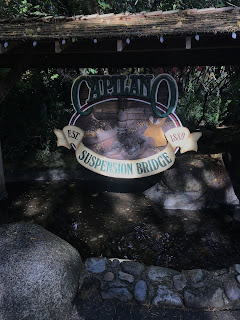 This place was absolutely beautiful. The bridge is 240 feet high, and completely breathtaking. It wobbles quite a lot, but that just made it more fun! You walk over a waterfall and a river, and are at the same height as the trees. There’s a lot of people taking selfies, and I swear to god we were stuck behind these two women who acted like they were models. It’s just like - come on Tracey,
you’ve pulled the same pose in the last six shots and all the trees look the same so MOVE ON because you’re blocking the fucking bridge.

The whole place was lit up with these beautiful spheres, and it was truly magical. We did tree top walks, across 6 or so mini suspension bridges, walked through forests where we saw amazing mushrooms and even saw a banana slug, which is a yellow slug, that looks a lot like snot. Not crazy about the snot slug, but the rest of the place was incredible! We also did a cliff walk, which was awesome, if slightly less bouncy. 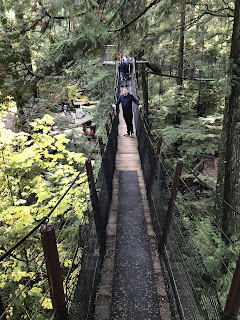 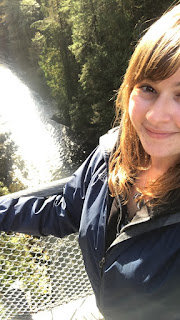 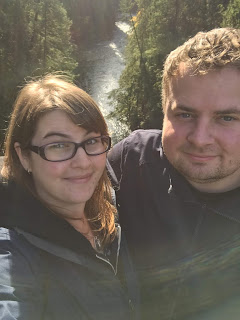 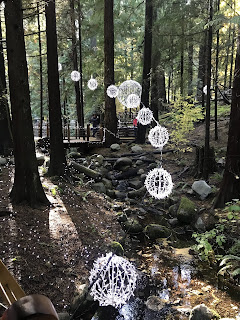 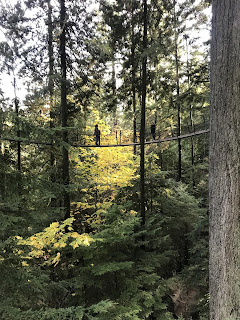 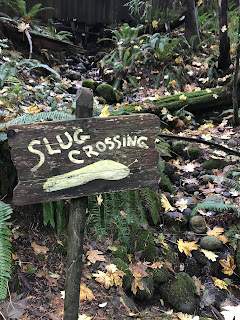 Also people kept picking up the giant leaves that were falling from the trees. It was kind of beautiful - it felt like you were in the middle of glorious yellow snow (not the wee kind) and it scattered around you beautifully. However with no explanation this man kept tucking them inside his hat, so obviously there are weirdos all over the world. 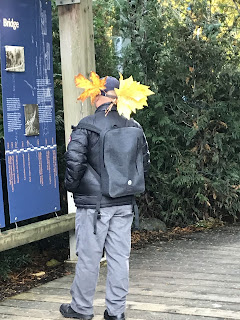 After Capilino Bridge, we ventured into Granville city centre and having a mooch around the shops. I still haven’t bought myself anything but flip flops, and I am upset about this. I just want to treat myself, and there’s absolutely nothing I want. My chin spots are flaring up a treat though. I’m basically touring my acne around America. Maybe I could buy some super expensive cream here full of false promises that will just make the problem worse, but I’ll truly believe it will help. 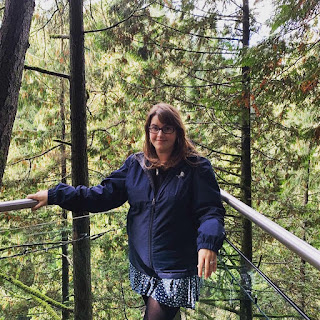 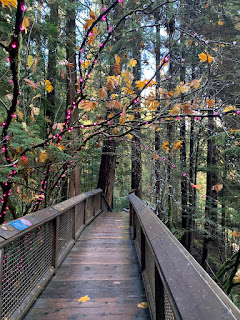 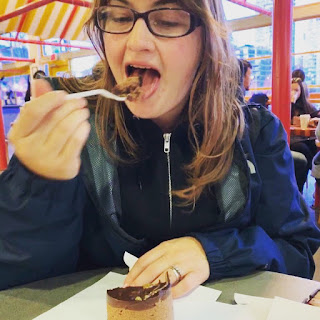 We finished off the day with a Japanese BBQ, where you cook the food yourself on a grill in the middle of the table. This kind of thing is nonsense really, because you’re just paying money to cook your own food and may as well just have a bbq at home and that way you won’t have to have kimchi, which is rotting cabbage and we’re all pretending it’s okay. It’s not. 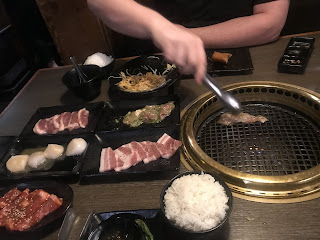 I’m heading back to LA, and absolutely buzzing for the sunshine! If you need me for the next 2 days, I’ll be the lump next to the pool, holding a gin. Love you! Xx
Posted by That Wag Life at 09:59