Officially part of the crew.

So I haven’t done an update for a couple of days. This is mainly because we headed back to the sunny sunny land of LA and I led like a sausage by the pool and tried my best not to move. 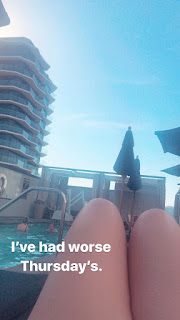 The flight back to LA was fine - it was three hours, but bearable and I wasn’t sat next to anyone talkative which is the main thing. Netflix had Pitch Perfect 2 available to download so I was totally buzzing to settle down and watch that. I was flying on a different flight to Bertie, running 3 hours ahead of his schedule. As a result, it meant there was no shuttle waiting for me, and rather than pay out $100 for an Uber, I decided to get the bus!

So there’s a direct bus that links the airport and Hollywood Boulevard - no stops or anything. It’s also an incredibly financially viable option, costing only $8! Unfortunately because it is only eight dollars, they cut costs in other places, such as suspension, seat belts and air conditioning. It was a long 75 minute drive, but it meant I didn’t have to sit in the airport for three hours, so it was worth it.

I then had a struggle getting the room key, because (clearly) I am not a 6 foot man with facial hair called Bertie. I was so desperate for a wash and just to take my bra off I nearly cried when the man said he couldn’t give me the key. I presented pictures of our wedding day, a photo of Bertie’s passport, the bill from our last stay - everything I could think of - but still was not allowed the
key. Thankfully, the tour manager had arrived in the morning, and he was in his room!! So they called him and got his authorisation and finally, the key was mine! 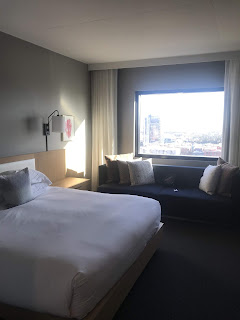 And best of all - THERE WAS A BATH. A PROPER BATH. A ROLL TOP DEEP BATH. I judge my baths on what I call the “knees and nipples” scale. Basically, if it is possible for both my knees and nipples to be submerged at the same time - it’s a winning bath. 90% of the time this isn’t achievable. But this bath delivered, and I’m not ashamed to say that over the 2 nights we were there, I had three baths.

Not ashamed at all. 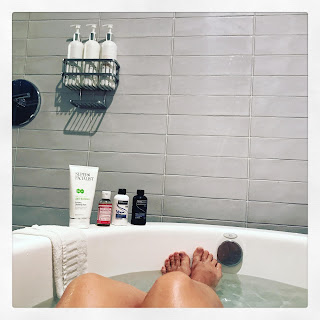 That evening, Bertie and I went to this amazing restaurant up in the Hollywood Hills. It was absolutely amazing, and we drank champagne and took in the view whilst having amazing Japanese food. Bertie had waygu beef, which is beef from a cow that basically spends it’s life being massaged so it’s extra tender. A massage for a cow. A moosage, if you will.

I fully dressed up for this dinner, and I can only assume I’ve looked so rough for the rest of the tour, because when I was there in my nice dress and make up, two of the band walked straight past me in the lobby. 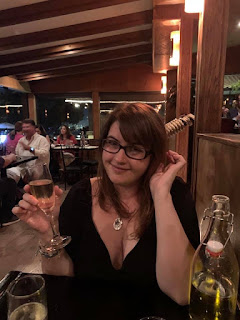 We then played our last gig at the Hollywood Bowl (I’m saying “our” like I’m totally part of the team now) which was lovely, and there were many famous people backstage including Ringo Starr and apparently Jennifer Aniston but I didn’t get to see her. There were lots of other people too but I had no idea who they were because I’m a rubbish blogger and I just wanted the free crisps. 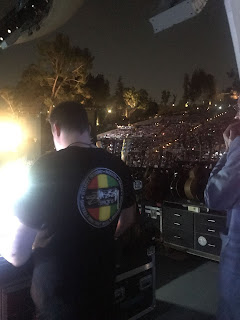 This is where things get a little hazy.

I know we started drinking, and then moved on to a bar called Frolic to continue drinking some more. Frolic isn’t really a classy establishment. The toilet has its own bouncer. Anyway, I know I definitely met a lady who had been at the show because when I woke up I had her phone number and email on my “notes” section of my iPhone. We drank there for a bit, and then headed back to the hotel to drink more. At 3am, I stumbled back to my room to go to bed - remarkably I did actually remove my mascara, which I think is a testament to my good upbringing and also a nod to my dear friend Dani who always taught me no matter how smashed you may be,
you don’t ever sleep in make up. Cheers babe.

When the sun came up, I was not okay. I will just say now, that if you are reading this Mum, skip the next paragraph and you’ll continue to be the proud mum you always have been.

If you aren’t my mum, then you should know I was so hungover this morning that when we got on the bus to the airport, I managed 45 minutes before throwing up into a bin. Whilst we were driving on the motorway. Surrounded by the band and crew.

It was like being on a school trip and being that kid that always gets travel sick and makes the whole coach stink of vomit. Only I’m not a school kid and I wasn’t travel sick, I’m just a very nearly thirty year old who’s completely fucking incapable with a penchant for gin.

I am blogging responsibly and sharing both the good and the bad - so I would file that experience under “bad”.

Everyone was very very kind and then said this means I am officially integrated so I think that’s something. Richie also told me he was also once sick on a coach but there was no bin so he just had to do it all over himself and someone else’s rucksack. At least I didn’t do that.

And this is where I leave you, sat on my American Airlines flight, with sick in my hair.

Thanks for still loving me. Xx
Posted by That Wag Life at 21:27