The day all my dreams came true

So today was literally up there with one of the best days of my life. Potentially better than my wedding.

The Fall Festival was taking place today - I had no idea about this, but I figured it was worth going to have a look, as it was only a 20 minute drive away, and Bertie was working. 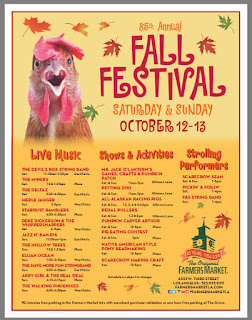 Now, I figured that it might be a good idea to get an Uber Pool to the Festival - if you don’t know what this is, it’s where your taxi driver also picks people up along the way who are travelling to a similar destination as you. I thought it would be a great way to meet people, maybe get some local tips and even meet someone who was going to the Festival. It’s also roughly £5 cheaper than a solo fare.

Basically, rather than have a jolly, all-in-this-together taxi ride, I sat in suffocating silence with 3 strangers, none of whom wanted to make conversation with me and I just wanted the car window to open wide, suck me through the vortex and sprung me from this horrendous experience. Honestly. Even my bum was sweating with the tension.

Anyway, thankfully the journey was finally over, and I had arrived at what I can confidently say was the best place in the world. 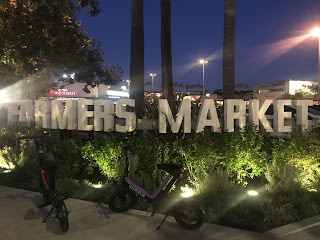 It was so American, I almost couldn’t cope.

I got there just in time to witness the PIE EATING CONTEST. Honestly. I had to stand on a wall to get a good view. For absolutely no reason, the host was dressed as a scarecrow, and sat at a table were 12 people, all covered in bin bags, with some kind of blueberry pie in front of them.

What I didn’t realise was that you weren’t allowed to use your hands to eat the pie. It was face-first only.

What then ensued was 90 seconds of absolute carnage, whilst an over enthusiastic hillbilly band played earnestly in the background. 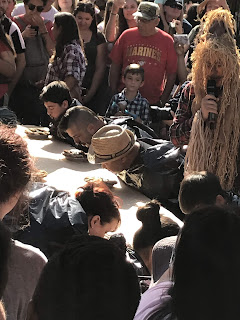 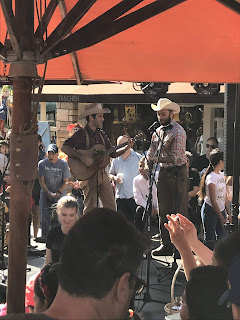 As a side note, when looking back through my pictures, I spotted this one I took, which I am fairly certainly is actually the man who played The Hound in Game of Thrones. Don’t quote me on that, but look at him - he looks so much like him! (Only covered in pie) 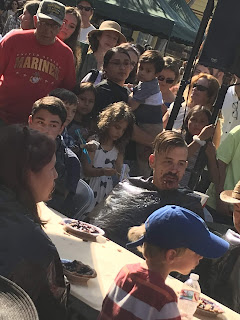 They chose the winner from the crowd cheering. The winner won a voucher. I hope it was a good one.

Anyway, I then headed towards the petting zoo, where I side stepped many a grubby handed child and stroked a couple of llamas and a goat. There aren’t any pictures of this part because I was soo excited about touching the animals to think about relaying this story later. I did snap a picture of the llamas later on, but it’s through a gate and a bit blurry. You all know what they look like. If not, imagine a squat, fluffy giraffe. You’re welcome.

Now, all this excitement  aside, the real reason I was here was for the pig racing. I first heard about pig racing when I was back in Dorset and I’ve been totally curious ever since. I won’t lie, I got there 25 minutes early to secure a good spot, because I was pretty sure this was about to be life changing. Once there, I also spotted two friends of mine across the side of the tracks (they aren’t hard to miss as a pair!) and they came to join me in my (totally premium) spot.

Now this is where everything gets good.

The hosts came out and made many a good pig based pun. I enjoyed that immensely. But then everything changed when they asked for a volunteer. For an adult volunteer.

Can you guess what happened? 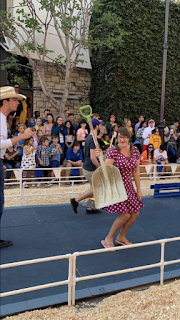 Yes. I was the chosen one.

So I was allowed to release the pigs for their race, and I’m not going to lie, it was just about the best thing ever. They were so little and lovely. All snuffly and eager and hairy. I got to release them 4 times, and then at the end, as a thank you for my participation, I got a ribbon. 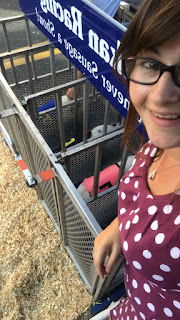 Following the pig extravaganza, I hopped on an old fashioned trolley cart and had a little whizz about. The man was very kind and took a multitude of pictures for me - this was actually free, and in all honesty didn’t go every far, mainly just around the outside of the venue in a circle, but it was exciting enough and made for cute pictures. 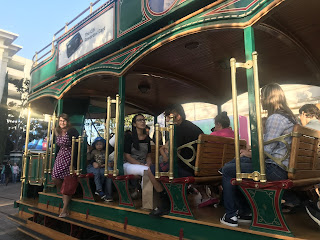 I then headed from there to the food market, which was absolutely amazing. There were a variety of different bands dotted all over the place, all playing different musics. The stalls ranged from gumbo, to tacos, to crawfish to empanadas to pizza to bbq ribs...I actually had to walk around twice to ensure I didn’t have another “melon instead of cake” moment like the other day.

In the end I decided to get something little from two stalls, and chosen a pork empanada (amazing) and a chicken taco which came with rice (also amazing) 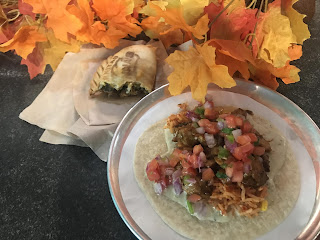 I actually missed the gig last night due to my day out, but sometimes officiating pig racing is way more important.

Fab, I said to the girls at work that the pig racing would probably be the complete highlight of your tour :) :)