If you’ve managed to find your way here: congratulations!

Rather than having to update everyone individually, I thought I’d create a blog detailing my extensive (twenty day) trip around the west coast of America, with a little hop over to Canada also to spice things up.

So obviously, I didn’t quite get the luxury journey Bertie did, but I did score quite lucky whilst getting here. I flew with Norwegian, which I couldn’t recommend more highly. The seats were big; the staff were nice, they gave me macaroons and I had no one sat next to me during the flight. Absolute win.

I travelled from London at 13:30 and technically arrived at 16:40, meaning I’d only hopped 4 hours in time, but actually sat suspended in time for 11 hours in the air. But the journey was good and I (obviously) watched terrible films (Moana, forever my favourite) and reverted back to 2011 and played my DS. On the whole, rather painless. 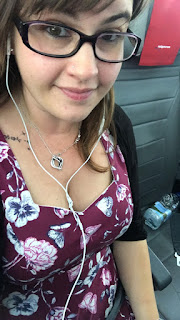 Here I am showing off the empty seat next to me.

I then landed, sailed through immigration after telling the man I was just here for a jolly (who, as a side note, had absolutely no idea who Liam Gallagher was, or who The Who are either, and was thoroughly unimpressed by my attempt at singing Wonderwall to try and explain who Oasis once were.)

I shortly found Bertie, who met me with the explanation that he hadn’t put deodorant on in two days, so the reunion was fairly short lived and whilst I only inhaled small sips of air.

We called an Uber to the hotel, which, I must say certainly is not amazing. For some inexplicable reason there is an exercise bouncy ball and a yoga mat in the room (have confirmed with others this is in all rooms and not a subtle hint from management to exercise), along with no actual mugs, just paper cups for you to make your morning tea in - with creamer. No milk. I’ll say that again - NO MILK. So safe to say I haven’t had any tea here and the facilities are rubbish and there’s not even a tiny biscuit to soften the blow.

(I should add as a side note that if you aren’t interested in my views on hotels, don’t follow this blog, because I like to rate each hotel as I go, and I am especially harsh on hotels without baths. I will include this screenshot from a conversation I once had with Bertie who was staying on a luxury yacht and sent me videos of the room and bathroom - because clearly I really am obsessed with hotel rooms and had asked to see them) 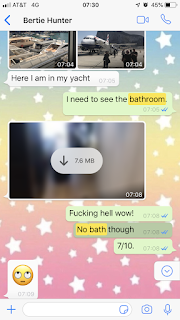 So after the initial hotel disappointment, we headed into San Francisco! At this point we had been travelling for roughly 20 hours so were pretty out of it. This is why I look awful in each picture that’s my excuse and I’m sticking by it.

Bertie has been to San Fran before with Echo and the Bunnymen, and was thankfully a great help in knowing which way to go. He directed us to these amazing little trams, super old fashioned, all wooden seats and one driving lever - they literally have to drive it to the end of the track and put it on a big wheel to spin it around. It’s a brilliant thing to watch. The ride was amazing, if a little hair raising, as it turns out they aren’t wrong about the hills in San Fran. More than once I slid backwards into the (thankfully) soft and plump thighs of the lady next to me. 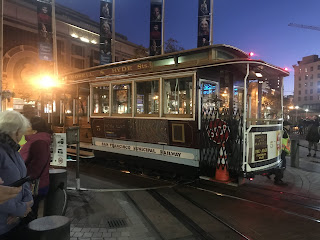 We arrived down in fisherman’s wharf after that half hour experience (which I would fully recommend by the way! Only 7$ and worth every cent) (I know, I’m so down with the lingo already) and headed to this crab restaurant Bertie has been dreaming about since he was last in America. I’m not a huge seafood fan, but I like nice restaurants, prawns, and any excuse to wear a plastic bib and eat with my fingers, so I was sold. We ordered the seafood platter which was amazing, and some clam chowder too. We didn’t get the chowder in a roll though as we’d already eaten a ton of bread as a starter. Thanks America. 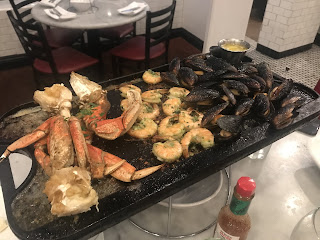 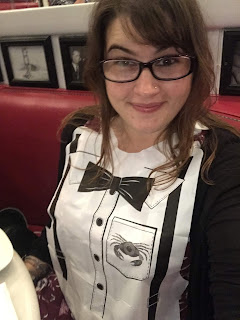 I have also included a picture of me in aforementioned bib as a treat for you all.

Following dinner, by which point I was borderline delirious, we knew we had to make it through to 10:30 so as to beat the dreaded jet lag. I should state that it didn’t work as I’ve been up since 5:30 making this blog! But anyway, we headed to a little jazz bar called Mr Tiddles, which is just the best name, to have a little nightcap (a Cosmo, obviously) before gratefully retiring to bed and basically passing out. I’ve slept for 8 hours, and I feel amazing!

Bertie has a show today, and I intend to go and see the sights. I’ll let you know what San feancisco has in store for me :)
Keli xx

Have a fab time xx

Beats the hell out of a rainy day in Bromley. have a great trip. See you both when back.

Your writing had me in stitches again - and I feel your pain on the tea front. One of my friends went to stay with her American friend for a couple of weeks ago...and they microwaved her tea instead of using a kettle. The absolute horror.